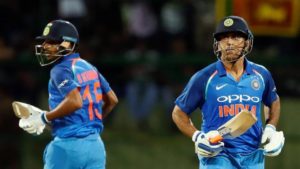 Last evening, India and Sri Lanka were playing a one-day cricket match in what has been termed the most boring, one-sided series ever. I read a tweet by Harsha Bhogle that there had been a dramatic collapse with India losing six wickets for 22 runs, to be at 131/7 chasing a target of 231. Then I read another tweet that mentioned M S Dhoni (MSD) was batting. It felt nostalgic: MSD fighting to help India win after the top order had collapsed. I turned the TV on, just to watch MSD bat. And was I glad!